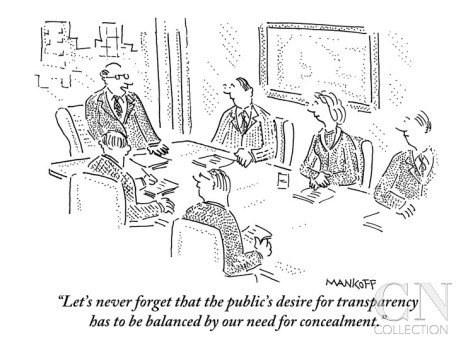 Since 2008,  Tarion Warranty Corporation, the Ontario government’s monopoly which regulates builders and provides mandatory home warranties, has been obligated to hold an Annual Public Meeting (“APM”). This was to create a “public service culture”.

With each successive year, Tarion has sought to take the “public” out of this meeting.  This week’s June 1st session was again a step backwards.

At the 2014 APM, consumer backlash seems to have caught management like a deer in the headlights. This year, consumers continued to ask serious questions about bias toward builders, over-lawyering of disputes, the lack of transparency in Tarion’s builder track records, Tarion’s lack of adherence to its own regulations, and the lack of consumer advocates on the board.

The management happy-talk this year only added more fuel to the fire. There’s a disconnect between what Tarion says it does, and what it actually appears to be doing. All the while selling us the “we protect new home buyers” slogan.

This year’s meeting was replete with the usual empty platitudes like wanting to give consumers “confidence in the home buying experience“, “educating consumers“, helping those “having trouble communicating with builders“, and “increasing confidence in Tarion’s decision-making“, and “improving the service experience”.  All of which is of zero interest to someone freezing in their new home, or fighting Tarion’s lawyers to get their homes fixed. One consumer quipped she was pleased to attend the Annual Tarion PR event.

It was announced at Monday’s meeting that Tarion has hired yet another “consultant”.  You guessed it, a lawyer, for early dispute resolution.

A very news-y item to come out of Monday night’s meeting was: Tarion has completed a plain language review. From now on Tarion will only use clear language to communicate with consumers, making everything for us easier to understand. As opposed to what?

Here are a few of the measures taken this year to stifle consumer feedback at the meeting:

1) An “external moderator” was hired to control the questions from the audience, shielding the Chair and CEO from angry consumers or tough questions. To ingratiate himself with the audience, the moderator announced he knew nothing of Tarion or its activities. An avuncular figure, he seemed to really get into his role during the meeting, asking one or two questions of his own when his curiosity got piqued, and occasionally answering a question which was directed at Tarion. He unctuously apologized to a Tarion executive for calling him “Ian” when he should have used his surname. But, he explained, it must have been their common background in London, Ontario which caused this slip in formality.  This silly banter seemed a tactic to reduce the time allotted for consumer questions.

2) No video or audio recordings allowed by anyone; only Tarion was allowed to video-record the meeting. No one is permitted to have a copy. (Reason: to protect our privacy!)

3) A limited number of “live” questions were permitted from the audience of approx. 200 attendees. Consumers were instructed to line up behind one of the two standing microphones in the cavernous room to wait for permission to ask their question.  The moderator whittled away more time with silly anecdotes and turned frequently to read anonymous, pre-submitted, questions from the screen, or questions from web viewers.

4) The webcast was cut off half-way, according to several participants, as was the case last year.

5) The meeting was held at a large hotel not easily accessible by public transit;

6) Consumers had to stand in front of an intimidating Spinx-like row of 16 unidentified board members, lawyers, and “leadership team members” to ask their questions.

7) Consumers were cut off from the microphone as soon as their questions became “inconvenient”, such as “How much did you spend on lawyers fighting my family in court?!”   The moderator simply turned off the microphone, the CEO promptly sat down, and the moderator announced he was turning to a question from the web audience.  Oh here’s one: “What can I do about nail pops in my new home”? Panel, anyone like to answer that one?  Many of us haven’t experienced this top-down handling since high school.

8) Consumers who formulated their questions like statements were cut off from the microphone as well. A polite 60-something lady mustered her courage to approach the microphone and say something which represented the feelings of many: “I keep coming to these meetings and you say you’re fixing things, but you’re not…”  The moderator again – No, No, NEXT!

9) Consumers tried to hand out information regarding their Facebook site “Make Tarion Accountable” to other consumers, but were told to stop. As far as I know, freedom of speech is part of our Charter of Rights and Freedom. Tarion seems to be the exception to many rules, so why not this one too.

After the last questioner had been shut down, the audience had no appetite for the closing remarks from the Chair, another prominent builder. The board disappeared into the confines of the hotel away from the madding crowd.

Thanks to all of you who were brave enough to come out to the meeting, ask your questions, and attend our consumer news conference prior to that. We need to keep asking questions of Tarion, the LAT, and the governing Liberals who continue to stonewall reforms.

Moderator or not, censorship or not, it seems to have fallen to us as individual consumers to make Tarion accountable.