“The clocks were still striking thirteen”. My observations from a License Appeal Tribunal hearing 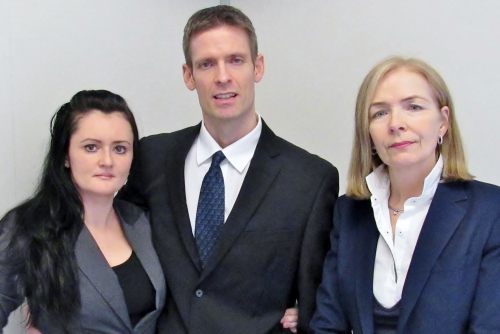 I’ve been attending a hearing at the License Appeal Tribunal (LAT) as a concerned member of the public, for 9 of the last 27 days since it began last September. The applicants are a young, educated, self-represented professional couple, with a small child at home, trying to get their new home fixed under Tarion’s mandatory warranty. The respondent is Tarion Warranty Corporation, with its in-house counsel and legal experts from a top Bay Street firm. The builder is the “Added Party”, which means he’s agreed to “fully co-operate with Tarion.”

Tarion’s heavy-ing up on costly litigators to fight self-represented consumers seems like using a baseball bat to kill a fly. The homeowner is up against two sets of lawyers, Tarion’s and the builder’s, as well as top engineers and technical witnesses.

The homeowners didn’t build the home, yet the burden of proof is on them to prove the defects. The money Tarion has spent so far on engineers and specialized litigators could have been used to fix the home. Lawyers for this type of hearing can cost $1,500 to $4,000 per day, with an up-front retainer costing anywhere from $30,000- $60,000. Its not easy to find a law firm specialized in this area who is not already used by Tarion, the building lobbies, or major builders. No surprises there, that’s where the big money is.

What ordinary new home buyer can afford these legal fees? Not even middle class, two-income families. Tarion can, and does, pay these fees, using the warranty fund which was meant to fix new home defects.

As an Ontario government monopoly “protecting new home buyers” and “regulating the building industry”, Tarion doesn’t have to disclose what it spends on lawyers to fight consumers in court. Who would have thought the government monopoly paid to protect us from building defects would use the warranty fund to fight us in court, letting shoddy builders off the hook, and shifting the cost of someone else’s wrong-doing back to us?

The legislation Tarion administers, the ONHWPA, is “consumer protection legislation”. Its meant to be given “a fair and liberalinterpretation“, according to the courts (Mandos v. ONHWPA, 1995). Anyone observing the LAT would be hard-pressed to find anything going on here which looks even remotely like “consumer protection”. The usual legal tactics of attacking witness’s credibility, withholding evidence as long as possible, using legal procedure to outsmart the other party, delaying the proceedings, wearing down opponents, its all fair game at the LAT against self-represented homeowners.

Tarion enjoys a monopoly and an arms-length relationship to government. The government has created a 900-pound gorilla, and seems to ignore its duty to the public to make this monopoly accountable and transparent. Tarion is not subject to oversight by the Auditor-General of Ontario, nor the Ombudsman of Ontario, nor the Sunshine List which discloses executive salaries. A giant monopoly with a huge public trust function and little or no oversight – is just plain irresponsible.

Tarion brings in about $33 million in mandatory fees annually, and pays itself $26 million in salaries, while paying out only $3.5 million in claims.  Catch me if you can.  And you can’t.

During the LAT hearing I’ve attended – its open to the public – I’ve made notes on things which seem so absurd they could have come right out of a George Orwell novel.

Here are a few:

– The LAT ordered the homeowners to remove all transcripts they’d been given by the LAT itself from their social media site. No reasons given. The hearing is “public”, but apparently not that public. Self-represented consumers often use social media to communicate with support groups, seeking tips on how to deal with the traumatic courtroom experience, just as lawyers routinely consult with colleagues or retired members of the profession. Without free use of their own social media sites, self-reps are cut off from valuable support and useful feedback.
Under the federal Charter of Rights and Freedoms, all Canadians are entitled to “freedom of thought, belief, opinion, expression, including freedom of the press and other media of communication.“  Limiting the rights of consumers from discussing what happened in a public hearing on their own websites is puzzling; the court ordering consumers to remove information from their websites, which is neither offensive nor obscene, seems like censorship. Can an LAT adjudicator trump the federal Charter of Rights and Freedoms?

– Both the Chair and Tarion’s counsel have said “the Ontario Building Code(OBC) “isn’t particularly relevant to Tarion” (Chair); the “Ontario Building Code is not relevant“; “the Ontario Building code is not the basis for Tarion coverage” (Tarion’s counsel); and “anything in the OBC wouldn’t have much bearing on the day to day operations of Tarion” (Tarion’s “inspector”). “I don’t have to know Building Code” (builder). That’s all baffling  to new home buyers who rely on the Ontario Building Code as a minimum standard in new home construction, with strict enforcement. If the OBC is taken so lightly by the industry regulator, builders, and the justice system, what’s it for anyway? The installation of smoke detectors, for example, is also covered in the OBC to protect the public. Is this also “not particularly relevant” to builders, Tarion, or the LAT?

– “Concrete has no stiffness” – an astonishing quote from one of Tarion’s expert engineers.

– The builder’s “I DUN-no, I DUN-no….” seems almost sane in the context of the above.

The LAT process seems to treat the homeowner like he’s the villain. He’s the one on trial for a home with construction defects he didn’t build. The builder rarely makes an appearance, undoubtedly reluctant to pay his lawyer the $1,500 – $3,000 (ex-HST) per day. Sometimes I sit there and wonder – where’s the guy who built this home? He’s the only one who knows what he did. But Tarion defends his interests, and their own, and brings in all the heavy artillery they need to get the claim dismissed. The builder’s objective is to avoid liability and defects listed on his Tarion record, and Tarion wants to limit their own liability. All undoubtedly “legal”, but unjust.  This is not good for consumers or communities left with a stock of homes with deficiencies. Further, there’s no deterrent for shoddy builders: they can lawyer their way out of responsibility for their work with big brother Tarion’s help. This is not consumer protection, its builder protection. What the LAT has ended up doing is shielding shoddy builders from accountability, and Tarion itself from liability and its commitment to administer consumer protection legislation.

The homeowners in the case I’m following have been fighting for 1 1/2 years to get their home fixed, and they return every night to a new home with construction defects.

We all can understand why lawyers and judges don’t like dealing with self-represented parties. Consumers don’t like dealing with lawyers and the courts either. We understand why surgeons don’t like dealing with untrained personnel in the operating room. Two plus two equals four. But the multi-million-dollar corporation charged with solving home defects and regulating the building industry is not doing an adequate job. Tarion continues to advise consumers to go the LAT to get resolution. Nice advice from a company who wins 93% of the cases.  Tarion’s own “internal ombudsman” (isn’t that an oxymoron?) advises consumers to go to the LAT. No one’s fooled anymore by him saying he’s not biased in favour of the company paying his paycheck and doing his performance reviews. Yet top Ministry officials continue to sell us this silliness.

Many consumers have given up on the LAT with its 93% failure rate, and proceeded to sue their builders in provincial court where Tarion is not a party. But why have a Tarion warranty at all then? Its costing us money, and costing taxpayers money to fund the LAT; its not a user-friendly forum, not solving problems, and creating legal nightmares for all involved, while filling the pockets of Bay Street lawyers at the consumer’s expense.

It seems the consumer’s the villain at the LAT, the wrong-doer is defended by the “regulator”, and the justice system is willing to move the goalposts when the deep-pocketed monopoly cries foul.

22 responses to ““The clocks were still striking thirteen”. My observations from a License Appeal Tribunal hearing”